You usually meet HR people twice; first when you are hired and then when you are leaving. I had the chance to meet a full delegation of HR Directors this week, whilst covering one of the biggest HR Events in Europe: HREvent13.

Everything started with an early morning, catching the 5:30am train to Birmingham. Then walking the icy streets without falling, making it to the ICC where the 11th Annual HR Directors Business Summit was taking place.

There is big machine running behind a Human Resources department and a two day event was going to draw attention to the main pillars supporting the industry of getting the right people in the right places. It involves changes, decisions, cultural shifts, psychology, innovation, performance, strategy, self believe, benefits, software and so on. I will tell you some highlights; nevertheless there were many interesting stories on stage and in the corridors.
Day One was enlightened when Baroness Eliza Manningham-Buller took to the stage (as she said – a very long name, don’t bother to say it again). With a great sense of humor and a strong voice the Baroness talked about “How to manage change under pressure”. She was head of MI5 -Britain’s Security Service- in the wake of 9/11 and during the threat of Al-Qaeda. Not an easy task right? During this time, this woman managed to double it in size, opened 8 new offices and established a training academy. While telling true stories about people at MI5 – I picked up on some good statements: 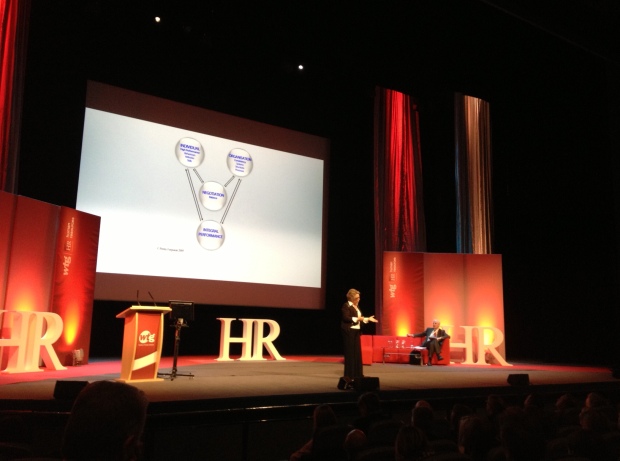 The program kept running and we kept moving along the conference rooms. I then joined “A guide to working the way you want” it sounded like the title for a best seller, instead Richard Peers, Head of HR at Vodafone, showed us how a company that sells its customers mobility, embraces the same principles. Vodafone’s head office at Maastricht, a city in The Netherlands, enables their employees to work whenever and wherever they like. In this building they replaced fixed workstation for multifunctional rooms, so you don’t have the same desk every day.

The concept is called mobile working which brings into practice what Vodafone stands for: simplicity, speed and trust. You can work surrounded by a library, by a forest, get a coffee and then move to another room and ask for feedback in an informal meeting.

The well being of it’s staff is part of the design and it goes further than an office layout, it motivates people to collaborate, enhancing transparency among the organization. It also has financial benefits, have a look at these figures:

Then we went for a lunch break, I think we deserve one here as well. See you shortly.

3 thoughts on “It is all about people”

Are you looking for…

See what I see

Beautiful friends. Beautiful London. 💙
So much fun at Charlie’s bday!
My Saturday 👵🏼😴

You can talk to my secretary (when I get one), reach me on social media, or send me an email to mrsmarthamonk@gmail.com.